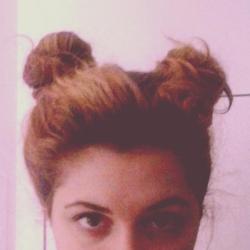 Hardly an It Girl is the cyber journal of a fashion editor by day and rant-lover by night. Not a fashion blogger, not related to Kim Kardashian. YES to drinks, independence and imperfections. NO to partypoopers.

20-something fashion editor, lover of rants and all things lazy girl.

You always think you know what is going to hurt the most. You think it’s going to be the thought alone. The fact, as if facts had thorns and claws. Little-known fact about facts: they don’t. At a very early stage, harsh truths, incidents, important events of your life are like stones that are thrown at your face: they might hurt, maybe they will even break a tooth or two. But, once they fall to the ground, it’s done. They are just there, and you stare at them in their innocence, and you think: did someone just throw this stone at my face? You look around —  no one. Did you maybe just imagine it? But the pain is there. The gap between your sane teeth is bloody. And it hurts.

Some people, the lions, the unfortunate, they say they experience some heart-wrenching pain like never before. I imagine it like eating a bunch of thorny roses without chewing: awful, all the time. It wasn’t like that for me. I am an iceberg person. It’s all numbness and emptiness. Then a lot of feelings —  unrelated feelings: extreme desperation, anger, euphory, I even go a little crazy. But no pain, meaning: no heart-wrenching pain that makes your stomach churn and sets your limbs on fire. Where is the pain? You want it, you crave it. You think you owe it to someone —  to yourself? To him, her, them? They’d be disappointed if they knew you are not grieving. But you are. Or are you?

For a while, it even stops hurting at all. You think you got away with it. Great! Now it’s time to move on. Move on, then; one step at a time. Right, left, right, left. Laugh, eat, drink, talk. All is good, all is full of energy. So dreadful was the feeling of death that just shook you to the core that everything of life and love is bursting with color. You tell your friends you’re making steps ahead —  you are so strong! A lion, you, as well. It’s gonna be just fine. Just a few weeks from now, it’s going to be ok. You even smile earnestly for the first time again. And then —  then it hurts for real.

It’s different for everyone, I guess. For me it was when his profile was wiped out the Facebooksphere. Stupid, I know. But this meant just one thing: he didn’t exist anymore. He was really gone. I couldn’t hide in memories and old photos and messages. I couldn’t pretend he was just in another country, like always. Every trace we left online side by side, gone. I saved his pictures before it happened, but pictures are not his words, his nicknames, a lukewarm reminder of his presence. All I have is a folder in my office laptop full of pictures from three, four years ago, like a stalker who is not good at her job. As I typed his name in the search bar and saw nothing appear, I finally felt it: confusion, perdition, loss. Realization. It was there at the tip of my fingers —  pain, the heart-wrenching one. The stone had hit me in the face months before, and I had finally found the guilty hand. He was gone. He is gone.

I would like to say that was what hurt the most, but I’d be lying. Suffering in that conscious way brought me to a point I thought impossible, inexistent. I had just saved myself from the agony of not going through agony. I just avoided by a whisker the possibility to block in all the ache and let it eat me from the inside. As I sat at my desk looking at his name finding no matches in the search bar, I felt bad, yes. I felt lost, a million leagues away from any intelligible life form that could save me. But, somehow, I was still saved. I was rescued from the curse of letting something eat you up while you are not looking. This is what would have hurt the most. Not now —  but one day. One day I would have woken up with a broken soul. And now my soul is not doing well, and it’s in pieces I need to sew back together. But I am free. I will be free.